Goodaye all. Trying to get too much done, not enough time to keep up, so out of Dubbo late last Sunday afternoon, into Brisbane early Monday. Me rained on while looking where to park and where I had to be to then get backed in, to either be able to split and or, get in as a double to unload. Backed under a tree, cost, one branch and me wet more, checking all was OK. Hard to see above and behind you in the dark and the rain.

Wait for customer (thanks to daylight saving for getting in my break and it didn’t even fade the paint on the truck) where I had been told I would have to split to unload, not so and another b-double reversing challenge accepted and done in two goes, no rain thank goodness to unload. Another copy of Owner Driver to a customer, interested in the TRUCKRIGHT Industry Vehicle and its curtains etc.

I had sought a day off if not needed and luckily that worked, so with thanks to Nick and Dave from Rod Pilon Tpt Brisbane, I was able to attend the HVNL Compliance and Enforcement meeting last Monday. Thanks to young mate and driver Nick for also making the effort. His first at of one of these sort of events and he had a go, contributed where he could and is keen to make a difference and see things improve. He admitted to being a little overloaded with detail and much to think and reflect on after the event, but like all these things unfortunately, there were from my point of view, not enough drivers with the only ones being him and I.

True the regulators and others must have a say, but who gets the most “in your face” compliance and enforcement issues? Drivers need to have more and better access to such events. The other side of course is the vast majority of those attending would be being paid whilst attending, or at least not be losing wages etc as drivers would and do.

I networked, offered a trip to a couple of prominent players, had one offer me a camera and am still to follow up on others. This one of four such meetings, aiming to solidify some of the input to the HVNL review papers and to gauge feelings on issues. Workshopping multiple themes, able to float and contribute between groups as needed or stay and watch and learn. Using an app to allow all to then vote on the outcomes from each group, seemed a good use of technology and a fair and open way to gain the feelings of the group attending.

Once back in the yard, load and away and back up the Gap, finally open since Friday and looking forward to the best feed of rissoles and salad on the road at Fisher Park, but they like many others lucky not to get burned out but with the road closed for a lengthy period, business seriously affected so had to have sausages, but still a terrific feed.

A couple of pick ups in Warwick, then a few drops and into Dubbo for the night, still in room K200 and up at 1AM for the Triple M Nightshift spot. Unloaded and reloaded while an axle problem addressed, off to Wagga for the night and catch up on diary and paperwork. Unload Wagga, unload Griffith and pick up Griffith, more reversing practice, more times here to get in and tighter too, letting cars through was my excuse and then into Melbourne, unload reload and off again.

A night at The Rock and planning for home Friday night till I got a phonecall, would I like to do a trip to Bourke tonight? Working out hours and stuff, details suggested a possible problem, but roadtrained out with a snack at Nyngan, Saturday long process unloading and swinglifting, but home in Dubbo at 4.45 so I can go to Melbourne following my regulation 24 hour break.

I did manage to find some green reflector bays, putting the industry needs first, as none out that way. Still a couple more to do one day and plenty of other roads as well.

Sunday and been to the library for some new audiobooks and music, done shopping for the week and cleaned the frig and half packed the truck. Still got lots to do and may defer audiobooks review for this week till next as have to fix a mudflap if I get time. Till next week, Safe Travelling, Rod Hannifey. 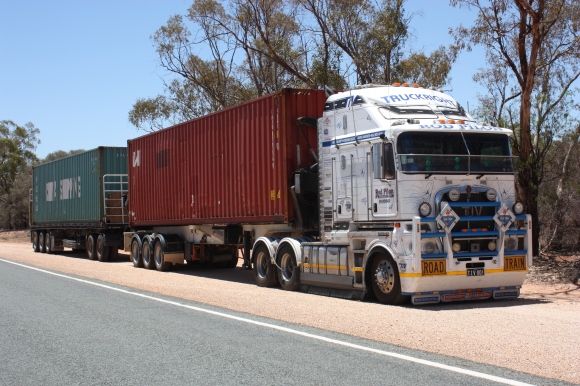 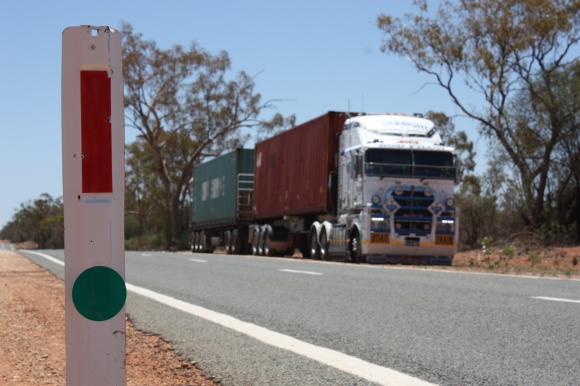 An Australian truckie aiming to improve both how the road transport industry is seen and understood by the public and to improve road safety for all.